Education is the foundation of the country and every child has a right to quality education. Yet a huge disparity exists between a rich child and a poor child.

It has been observed that children from affluent families, going to privileged schools do not know what their counterparts in slums, going to Govt. schools are like. They see these children as maids, vehicle repairmen and cleaning guys, tea servers, etc. But little do

they know that these children form an indispensable segment of society, on which the affluent section of our society depends heavily. 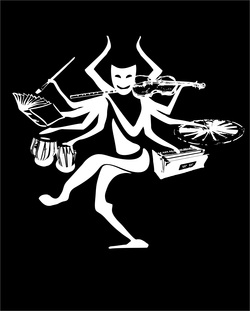 SWANS is a registered Volunteers Association of students and professionals from different streams and professions, Colleges and Corporate. Striving to build a concerning and humane society, and a cohesive and strong nation, SWANS has adopted a strategy for encouraging social volunteerism among masses and giving them due recognition and status in society through a system of Social Credits.

SWANS has been conducting various activities for the underprivileged children of Bhopal slums, to give them equal opportunities like other privileged children. One such activity has been UDAAN - SAPNO KI, that started off as a Summer Camp for slum children and gradually continued into a round-the-year weekend activity. About 50 children from slums in Bittan Market area are trained on Singing, Dancing, Acting and Computer literacy by SWANS, every Sunday at the Regional Museum of Natural History, Arera Colony.

Taking the cue from UDAAN, SWANS decided to give a platform to all slum children of Bhopal to showcase their talents to the Art Gurus of Bhopal, and get their blessings and guidance to shape up a dream future for themselves.

Titled HUM HONGE KAAMYAAB, the Talent Hunt competition will be spread over 3 days 14-16 Jan 2011 in the beautiful environs of Indira Gandhi Rashtriya Manav Sangrahalaya AMPHITHEATER. IGRMS has agreed to co-host the event with SWANS for the cause. 120 selected children from 4 NGOS working with slum communities, 1 Orphanage and 1 Shelter Home (for street children) will showcase their talents in front of an esteemed panel of judges from various fields of art. Since the objective is to bring up the hidden talent of these children, all art forms will be accepted.

HUM HONGE KAAMYAAB is the only event of its kind with cash prizes and trophies for the winners, but is organised entirely without any sponsorship. 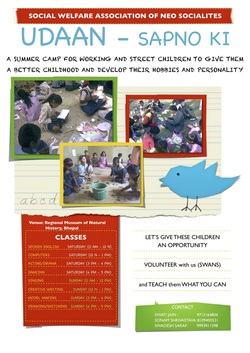 As summers arrive and schools close down, lots of summer camps mushroom in the city, to train and equip school children on soft skills and hand skills to shape up their personality. But all these camps are meant for children who can afford the exorbitant fees and belong to better off schools.

A huge chunk of underprivileged children living in slums, having great potential, get ignored and miss such opportunities to develop themselves, because of lack of money.

It will be conducted free of cost for the children and will be supported through individual contributions. This will be a people’s project, where anyone having any skill and wishing to teach such children can come and participate in the camp.

‘UDAAN - Sapno ki’ was inaugurated at Regional Museum of Natural History on May 1, 2010 by Dr D P Sharma (ex Vice Chancellor, Barkatullah University). Dr Sethuramalingam, Scientist In-charge, RMNH was the Guest of Honor, and Abeer Vaishnav (Voice of India finalist) was the special guest on the occasion. Many other dignitaries and eminent citizens were also present and expressed their willingness to be a part of the cause.

The programme Udaan - Sapno ki intends to provide a platform for all underprivileged children from Bhopal slums to to make them aware of their strengths and guide them along to showcase their hidden talents in different fields.

Any citizen willing to support the cause may contact SWANS at 9893274407 or email swans.bhopal@gmail.com.