How it all started...

The Incident that sparked it 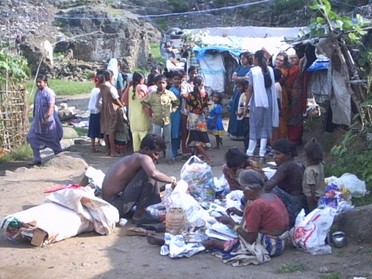 It all started on a bright sunny day in January 2005, when we accidentally met a group of ragpicker children, standing at a regular bus stop for school buses, in a posh residential colony in Bhopal.

In tattered clothes and bare feet, the bunch of five stood, watching gleeful children descend from the school bus, and running towards their waiting mothers. The only similarity between those children and them, were the bags on their backs. The difference however, was in the content of the bags. While one had books and tiffin in it, the other one had dirty garbage, collected from the backyards of the posh houses of these children.

But the innocent minds did not question the difference. Instead we saw a sparkle in their eyes, as they saw their fortunate counterparts, and their childhood.  The children only wished … A SIMILAR LIFE.

Gathering ourselves from the situation, we followed the children to their slum, to witness the contrast lives these children lived. Instead of waiting mothers, there were alcoholic fathers to greet them with abuses, and snatch away the rag bags, leaving the children to fend for themselves. Tiny feet bruised by glass pieces, walking bare on hot tar roads, carrying back full of garbage, with hardly a meal in their sunken bellies and forced to snort local drugs, was a common sight in rag pickers colonies.

The sparkle that we had earlier seen in the children’s eyes, egged us to probe the hidden ambitions of the children, and they screamed in unison, that they wished to become policemen. When we asked them if they would like to study for that, the response was a much louder NO !

After a series of questioning, trying to find the real reasons behind it, we found that the futility of our education system, combined with a fear of examinations and failure, kept these children away from education. These were the children of a lesser God, born to suffer the wrath of the privileged, and turn into law breakers to settle scores later. Neither the Sarva Shiksha Abhiyans, nor the mid day meals could divert them from their regular grind and the dark future.

Taking it up as a challenge, OASiS - A Social Innovations Lab tried to find an alternate path, to mainstream these children with society, and get them their right to a decent living. The search took OASiS to Shantiniketan (Guru Rabindranath Tagore’s dream), International Centre of Education, Aurobindo Ashram, Pondicherry and a few other non-formal education models.

​Combining their best practices, and designing a curriculum that could enable complete transformation of the child, OASiS collaborated with 3 Museums of Bhopal to create a new environment of learning and development for the children. Based on the belief that ‘Nature is the Best Teacher’, and ‘Exposure is the Best Learning’, PARVARISH – The Museum School was conceived and designed by OASiS with the collaborating Museums .

​With blessings of great academicians, teachers and learned people, Project PARVARISH started on September 5, 2005 in Bhopal.
Powered by